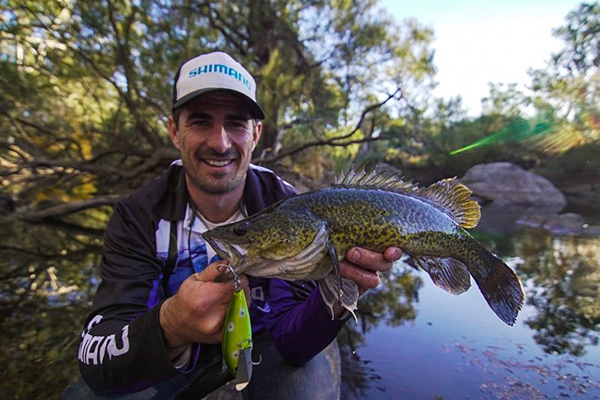 Unfortunately, Murray Cod can be the fish of a 1000 casts, so cracking a pattern without experience can be a tough thing to work out. Now, this is where I hope to impart a bit of knowledge to make it a little easier. These are by no means hard and fast rules, instead more of a starting point.

Cod on surface lures is one of the most visually rewarding ways to catch these iconic fish. I will share some of the observations I made to zoning in on key areas to try and take out the guess work but always remember if it looks fishy give it cast.

NOTE: You need to check with your local area or state in regards to closed seasons and restricted areas and regulations.

So where to start? This will depend on whether you are fishing an impoundment or a river….

I have found that most of the impoundments I’ve visited can be very different in appearance but will have some patterns that stay the same or similar to the next. For example, fishing those twilight hours around sun rise to sun set, I find will increase your chances. These fish will also bite well into the night so be prepared with torches and headlamps.

So, what areas to look for? With fish in impoundments, over weed beds is a great place to start. These give the fish an excellent ambush area. If possible, pick water depths between 2 to 15 feet as a guideline. Another good spot is a flat, adjacent to deeper water, any lay down timber and standing trees. If you can find all these things in one area it would be an excellent place to start.

I have found that when river fish are in the mood, time of day isn’t as import as where you fish.

What I look for is areas of cover such as, back eddies, the head of deeper pools at he the point of inflow, below and behind rapids and rocks, under cut banks, logs and log jams areas of weed creating cover and any shady pocket is well worth a cast.

Now as for the gear I use; while you can use a spin rod, I find the baitcast outfit is the best option if you are casting at structure. This is because it gives you the control to land the lure exactly where you need it to be. I’ve actually been using a Samurai swimbait rod as a bit of a utility on the rivers and it absolutely sends lures of all sizes sailing with ease. I recommend, 50lb braid and leaders anywhere from 40lb to 60lb. The heavy line is a bit of an insurance policy for getting larger specimens out from cover.

So now for the lure… I was lucky enough to get my hands on some pre-production Atomic Slappa’s to give a try. Now to be fair, I’m going to find hard to use anything else after its early success.

This is how it played out. It was the first cast at twilight, as I admired this lures action on the surface. I’d only walked the lure back about two metres across the surface, then boof, it had been taken in an almighty surface strike which displaced so much water, it turned into a few moments of chaos.

Landing a respectable Murray Cod is the icing on the cake, it’s moments like that will be hard to forget.

The Atomic Slappa is a medium sized lure (90mm) that has a very enticing action and an enormous presence on the water’s surface.

Casting distance isn’t an issue with it weighing in at a bit over 28 grams. It is set up with tough hooks and rings straight out of the box that won’t need upgrading.

Finally, how do I retrieve this lure? This is a great lure for any level angler as it metal wings do all the work! Here are some techniques that I use to help increase my chances. Firstly, if I’m fishing a structure, land the lure in the pocket right in a sweet spot, like between the fork of a fallen tree, next to a boulder and the bank. I let the water settle for a moment after a splash down and give it two small twitches, I think this imitates a stunned bird. If there is no action, I will wind it in in half metre increments with a short pause in between. Keeping the lure in the strike zone for as long as possible for around 3 metres then just move into a slow steady retrieve.

Cod will often hit the lure as you start to move it after a brief pause so be ready.

So, with open flats like in an impoundment, if you are casting from a boat towards shore, I like to start the retrieve the same way as mention above. This will ensure that your lure will stay in the as long as possible of any actively feeding fish.

Alternatively, from the shore casting over flats when the lure over deeper water I pretty much just start with a slow steady retrieve with a couple of pauses as the lures gets closer to the bank.

I hope that’s there is something in this that you find useful as Cod surface fishing can be a tough gig but if you put the time in and the effort you will soon reap the rewards.