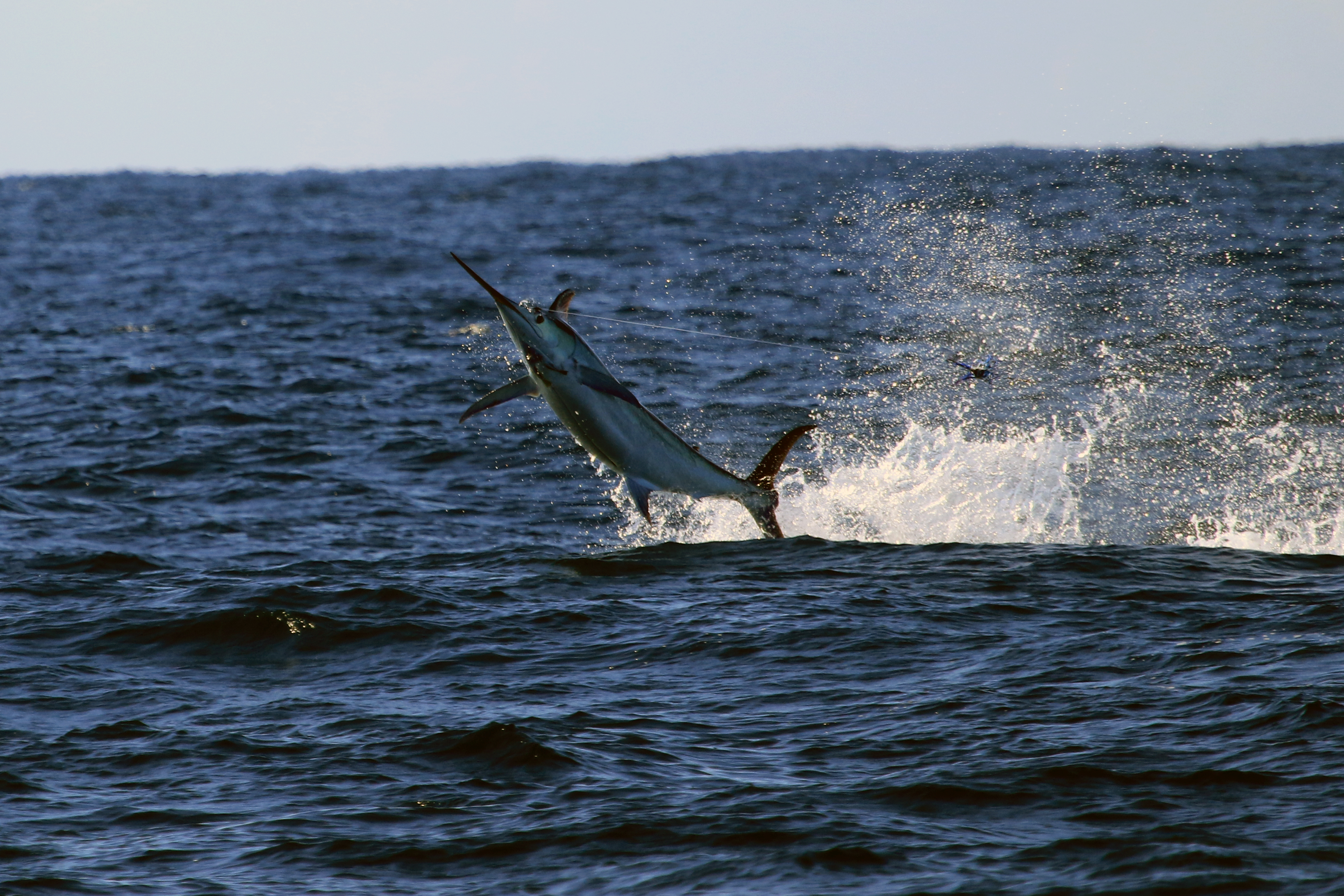 Blue marlin are arguably one of the greatest gamefish to swim in our oceans. Coming in both Pacific and Atlantic varieties, explosive bites, aerial tail walks down sea and long hard fought battles where every single inch of line has to be truly earned are just some of the characteristics of this species. It’s easy to see why chasing blue marlin is such an addictive past time.

These fish inhabit the waters along both the east and west coasts of Australia, most often being found on the deep side of the continental shelf. There are a number of ways to target these fish including switching, skip baiting and live baiting however the most popular method to target blue marlin along the east coast of Australia is by far trolling lures. When targeting any type fish, the gear you use is always a critical factor, that point cannot be stressed enough when talking about gamefishing and especially when talking about blue marlin. Blue marlin fishing is a game of percentages, especially those 1%ers that funnily enough always seem to miraculously align to cause a lost fish.

This article will take you through a few of the basics that can be applied when targeting not only blue marlin but chasing gamefish in general.

On the east coast of New South Wales and into south-east Queensland the blue marlin season generally runs from February through to May. While it’s still possible to catch fish outside these months, this is when the bulk of fish can be encountered. As with many species, whilst the bulk of the fish will be caught in the height of the season, many of the larger fish encounters tend to happen on the beginning or end of the prime season.

The ocean is a big place! Once you’ve crossed the heads or the bar from port, chasing marlin can feel like an intimidating thing with all that ocean in front of you. Along the east coast there are multiple hotspots that are well known for holding blues at various times of the year. The Riv Grounds off the Gold Coast, Coffs Harbour canyons and the Bait Station off Sydney just to name a few. These hotspots are a great place to target your hunt around and it is often a pretty easy task to find out when the fish are on as people are quick to brag about their successes on social media. Alternatively if getting off the beaten track is more your style and you want to go and find your own hotspot that’s always a rewarding possibility and something that all good captains around the world do.

So what are you looking for in an area when targeting blue marlin? The same things you look for when targeting any species of fish! Bait, structure, current and tides. If you can find all of these thing in one place then you have maximised your chances! At this point it’s probably worth taking a moment and explaining what I mean by the term structure in the sentence above. Yes we are generally out over the edge of the continental shelf and so no we haven’t got our sounder set to 500fa and are trying to interpret the dots on the bottom of the screen to see if there’s anything on the bottom. What I mean by structure is anything that creates a place where bait or fish might want to aggregate. This can be a canyon system that pushes nutrient rich water to the surface when the ocean currents hit it at a certain direction, a thermocline in the water or the convergence point between two different current systems or water bodies. All of these areas are the structures we are looking for and are good places to target marlin!

Preparation prevents poor performance! When targeting blue marlin you really need your equipment to be 100%. Conventional tackle for chasing these giants are large, specifically designed overhead rods and reels with 24kg, 37kg or even 60kg line. These outfits have earned their place as the preferred tackle for targeting game fish and especially blue marlin on boats worldwide. In recent years though with the evolution of high quality braid and better quality reels many anglers have started using smaller overhead or larger spinning reels to target these fish. A 20000 sized spin reel spooled with a high quality Unitika braid, matched with a high quality spin rod such as a Samurai X Tracta jigging rod, or equivalent overhead set up, is more than capable of handling the majority of fish that you will encounter.

When starting out lure trolling for marlin assembling a lure spread can seem overwhelming. Stick with well-known brands, like most things in life, they have their reputation for a reason. It is also a good idea to stick with the one brand. Different lures are often made to run in different positions behind the boat. Lure makers will often tailor their lures so that they have a range that can be run as a spread. Sticking with the one brand will also mean that all your lures have similar weight and constructions which should help them all work better together, instead of mixing lures that may need to run at slightly different speeds or lengths which may not be ideal positioning for your spread. I like to run a single, stiff rigged hook in my skirts. Over the years I have found that the hook up rate with a single hook is better than a twin hook rig where the hooks can end up working against each other and pulling out of the fish. A high quality hook, such as a Gamakatsu tuned tuna hook, is essential in this instance.

So you have identified the area that you want to fish, all your tackle and equipment is readied and prepped and you’re out on the water. When setting the lures, your spread, it’s important to make sure that you position the lures in the positions they have been designed to run. Some lures won’t work in short, close to the boat whilst other lures will eat up the ocean in these positions. As a general rule of thumb, lure heads with longer profiles are made to run in the longer positions whilst lures with shorter sharper profiles should be run closer to the boat. Regardless of the brand of lures you choose or whether you are running slant faced or cup faced lures your lures should run straight. If a lure is darting from side to side or has a really erratic action then it is likely spinning or not running correctly. When setting the spread I like to use a staggered pattern, stepping each lure out into its respective position and making sure there are no large gaps or holes in the pattern that a fish could inadvertently come into the spread and not be presented with what you’re selling. Remember, the boat is your biggest teaser!

Keys to targeting jewfish on breakwalls with plastics
November 4, 2020
Go to Top